HOW THE BOWLEY  ROTASERA LOCK WORKS 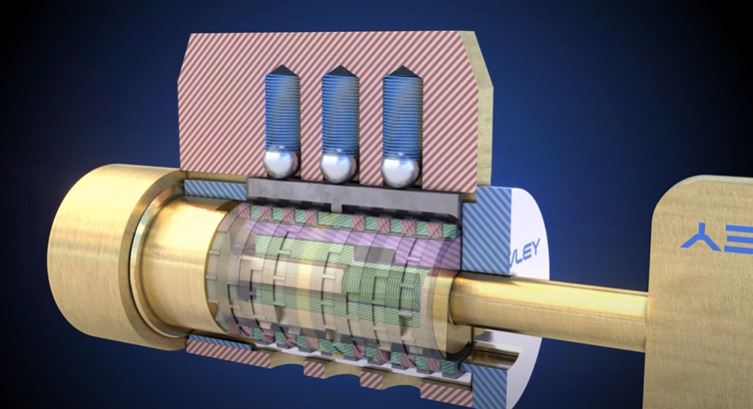 How Does the ROTASERA work?
The video above created by LockNoob is probably the easiest way to understand the inner workings of the lock. However the idea began as a question as to whether we could make a Bowley Lock style disk detainer. That being a lock in which the disks were not accessible directly through the key hole so that tools could not easily manipulate the disks. The second requirement was that this disk detainer lock needed to be bi-directional so as to be able to operate in a deadbolt and other applications that are bi-directional. After a ton of design work the ROTASERA was born. The ROTASERA's disks actually operate in one direction. You need to insert the key and rotate it from the 6 o'clock position, clockwise to the 12 o'clock position to align the disks. At that location you push the key into the lock which allows the side bar to drop, opens the lock and couples the key to the cylinder so the lock can actually function as a bi-directional lock. When you want to remove the key you need to return the cylinder to the locking position and then pull the key back out to disengage the key from the cylinder and relock the side bar. This is very similar to our original pin tumbler bowley lock functionality.
Can it be Picked?
In theory all locks can be picked. If you are able to emulate the key then it is possible to open the lock.  In order to pick a disk detainer lock you must be able to manipulate the disks into the true gate. Once each disk is in a true gate you can then open the lock. Most disk detainers use a side bar that is forced into the disks by the torque applied to one or more of the disks. More difficult variations will put that disk in a random spot to make manipulating the disks in front and behind that disk more difficult. The most advanced tools can have 3 picking tips all co-axial with one another to achieve this. In the ROTASERA you must go around a corner in order to reach the disks which complicates the tooling. A single pick may reach 2 disks so you would need at least 4 picks. But in our lock the tools can not be mounted on concentric tubes like in other locks. They would have to be L shaped tools of a very thin material so as not to interfere with one another. And because we have a reverse side bar which is a spring loaded side bar, applying torque to the cylinder although easy to do serves no benefit other than to bind the side bar.  We also have 3 or more false gates on each disk that are identical in every dimension expect depth as the real gate so because you cannot force the side bar down using torque you will not be able to differentiate between a real gate and a false gate as easily as in most disk detainers. Lastly our idler is what is used to reset the disks which is unique to our lock. If a disk is overset there is no easy way to turn that disk back other than to reset all the disks using the idler. This makes trial and error methods much more laborious and unlikely. All that being said we do not think that this will be a lock that will be picked in real life scenarios any time soon.
Can it be Bumped?
In general Disk detainer locks cannot be bumped. The ROTASERA is no exception.